Update On That Comix Jam Lantern I Was Talking About Yesterday...

- August 01, 2013
Yeah, none of the other artists who worked on it really wanted it, so there was no epic Rock, Paper, Scissors battle to determine the 'rightful' owner. But I still like it - it's got a Susanne Larner pirate on it, and a Carl Wiens octopus, and a Tim Snyder Kraken, so I'm glad to be the custodian of the lantern. So different from the time when I was four years old and in nursery school painting a giant tree on paper with about 10 other kids. "I'm gonna take this home and show my Mom!", I announced - which OF COURSE was a total joke that I was trying to make at the time, because the giant tree-painting was, like, 10 feet long! The response: "Niall, NOOO! You CAN'T DO THAT!!". Sigh. 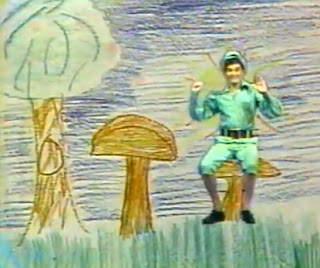 Those kids not getting my joke is my first memory of attempting to collaborate on a project with others. Years later, the Comix Jam is a monthly exercise in collaboration and it usually goes much better than that first tree-painting. Last night's Comix Jam went pretty well - Milé introduced a drawing game that he'd learned at the Kingston, Ontario, Drink n' Draw. I should've taken a picture of it to show you, but whatever - it's basically like the classic whisper-based party game 'Telephone', except with more drawing and passing around of paper. If you know any other good party games that involve drawing, please let me know. Comix Jams and Drink n' Draws seem to benefit from the odd artsy icebreaker or two.

Also THIS obscure Canadian children's entertainer came up in the course of playing that drawing game: Harrigan! It's been so long, Harrigan - we'd all forgotten about you! Couldn't resist looking the show up on YouTube.