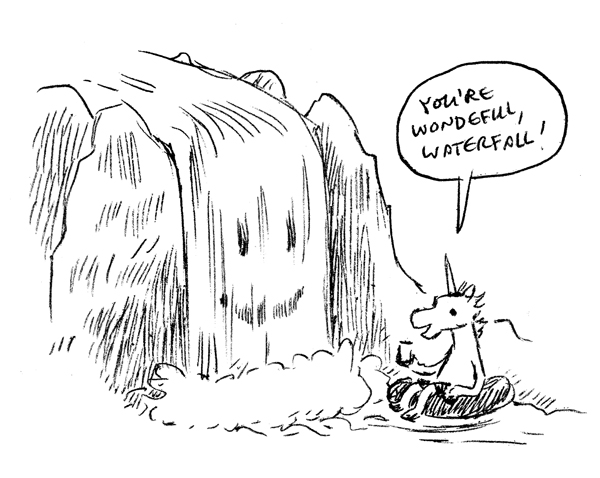 The local Rotary Club organizes this annual event where people can go visit Prince Edward County waterfalls that happen to be on private property. It was a warm spring day, so my girlfriend Sarah and I went to experience a waterfall in Waupoos (if you know where that is). The waterfall did not disappoint: listening to the sound of a stream constantly cascading over a cliff was, as expected, pleasantly hypnotic and restorative. You rock, Nature.

Last night, too tired at the end of the day to do much else, I found myself scrolling through Twitter, constantly refreshing the tweets for no real reason at all other than that there was always something new to take in. Twitter is basically an unending waterfall of human expression that just runs all day and all night, a place for the non-stop dropping of our collective mental meltwater. What is fresh at the top, seconds later is old news at the bottom.

But would I describe watching the Twitterfall as a 'pleasantly hypnotic and restorative' experience? Actually, surprisingly, yeah. Not in a Nature way, but rather in a 'humans and the things they create are pretty fascinating' kinda way. As long as you don't feel the need to carefully consider every drop in the waterfall as it passes by; otherwise, the unending streams of information that we're exposed to these days can easily start to feel overwhelming.

A waterfall (of any kind), I think, works best when you take a step back, marvel at its sparkle and roar from a distance, and just, you know, let it flow.